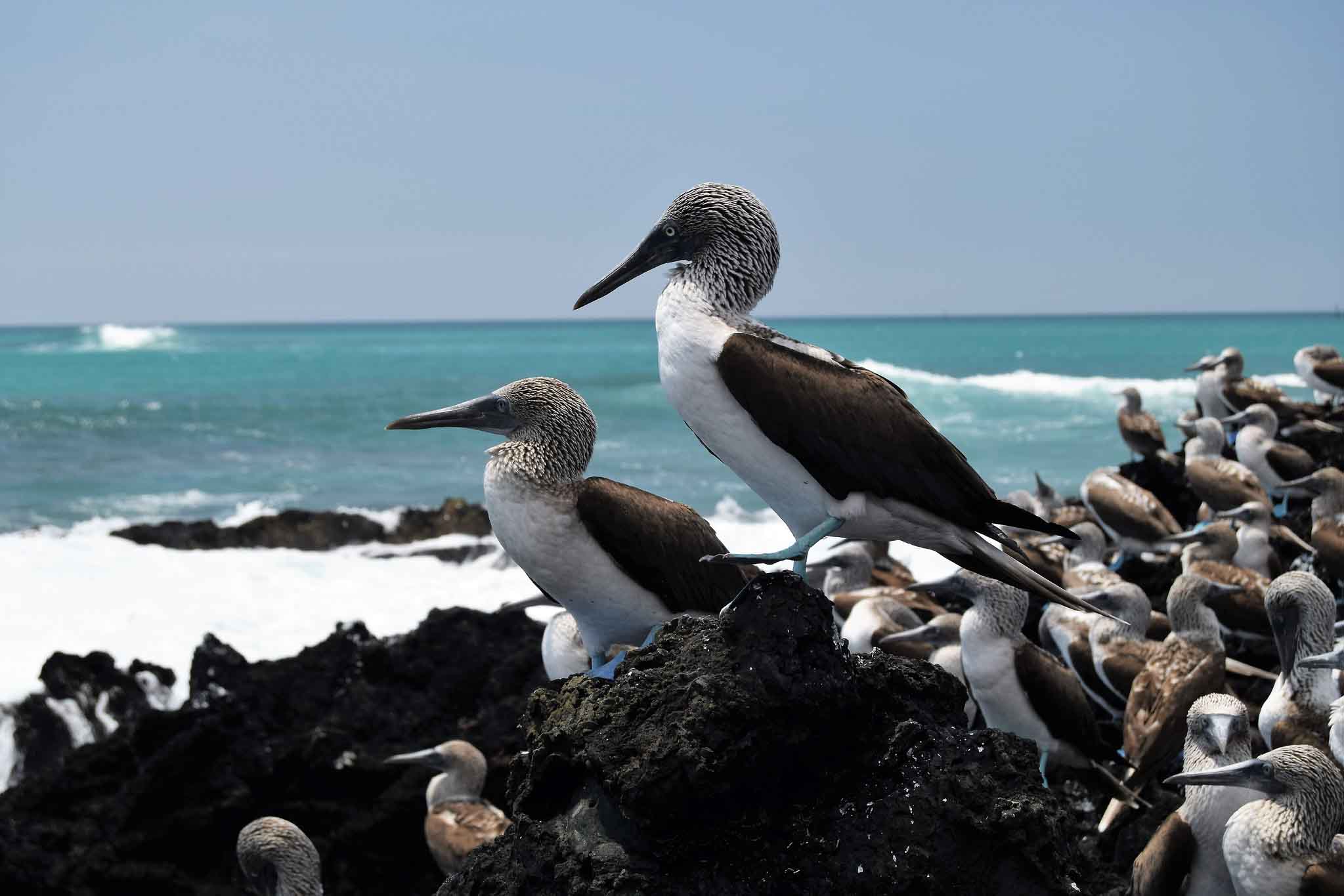 For travelers who wish to see a lot more besides the top sites of the western islands of Isabela and Fernandina, this is certainly the best option you can choose as you will have the unique opportunity to visit the marvelous Genovesa Island plus incredible hiking tours and snorkeling in the Marine Reserve around Bartolome, Santiago and Santa Cruz; this cruise has been carefully crafted so you can enjoy a fulfilling voyage.

Sea Star journey “B+C” itinerary: Upon arrival at Baltra Airport, travelers pass through an airport inspection point to insure that no foreign plants or animals are introduced to the islands, as well as to pay the park entrance fee of $100 (unless it has been prepaid). A guide will meet you, help you collect your luggage, and escort you on a short bus ride to the harbor and then on board Galapagos Sea Star Journey.

The Dragon Hill has been open for visits on 1993. This site is located in northwestern Santa Cruz Island and consists of a trail that lead to a hyper-saline lagoon behind the beach. In fact, this place frequented by flamingos, pintail ducks and other species of birds. This site has been re populated with land iguanas from Seymour, Isabela and Santa Cruz islands. There is a short walk to the Hill, which offers a beautiful view of the bay.

This little cove is located at the northern side of Santa Cruz island, this is a red mangrove lagoon very calm and quiet which made an ideal place as nursery for many sharks and rays. In fact, its crystal waters permits to observe large groups of white-tip reef, black tipped reef and hammer heads sharks, schools of golden rays and spotted eagle rays. To land here, there are two options, panga or kayak due to there are no landing sites. Sea turtles are frequently seen and sometimes they are seen mating in the mangrove-lined waters. Pelicans and Herons are also seen in this area.

This is a small islet (1 sq km) located just off the southeastern tip of Santiago Island. It is a recent volcanic cone, it has the shap of one Chinese hat, if you see it from north side. On the west it can be seen lava formations, formed under the sea and raised upward, this is why coral heads are found on the lava. This is an excellent visit for interpretation of geological features such as lava tubes and lava flows. Here, there are many sea lions colonies, marine iguanas and Galapagos penguins.

This bay has origin when the crater of this island collapsed below sea level. The wet landing is on a beautiful white coral sandy beach. This is a favorite island for birdwatchers: red footed-booby, masked boobies, wandering tattlers, lava gulls, whimbrels Yellow-crowned, and black-crowned and lava herons, with and yellow warblers.
Continuing on the trail, visitors climb gradually to the edge of the cliff seeing Red-Foots nesting in the Mangrove trees below. Bird watching includes sightings of Sharp-Beaked Finches, Large Cactus and Ground Finches, Galapagos Doves and Swallow-Tailed Gulls. Therefore, reaching the end the trail at the cliff’s edge offers an incredible view of the island and the many birds living there.

El Barranco is located in the southern part of Darwin Bay and it is also known as Prince Philip’s Steps, passengers will climb to a plateau that is part of the stretch of land that surrounds Darwin Bay on its eastern side. There is a big population of Masked boobies and Red-Footed boobies in the tree; Storm petrels as well as Short-eared Owls have found in Genovesa lava flows the ideal place for nesting.

Finally, this is the day to visit Bartolomé Island. It is situated across Sullivan Bay. It has an altitude of 114 meters, from where we can observe one of the most beautiful sceneries of the Galapagos Islands such as: Volcanic cones, lunar-like craters, lava fields, and the famous Toba formed pinnacle eroded by the sea. There is very little vegetation on this island.
It has two breathtaking beaches where marine turtles exist and at the base of the pinnacle, as well as a very small colony of Galapagos penguins.

The trail to the highlands leaves from Bellavista and passes through the agricultural zone, near the National Park boundary, the Miconia Zone, and then goes to the Fern and Sedge zone. With clear weather (unpredictable) this area affords beautiful scenes of rolling hills and extinct volcanic cones covered with grass and lush greenery all year round.
Then transfer back to Baltra for embarkation on flight back home.

Although the great majority of Galapagos visitors come here to observe and appreciate natural wonders. You can also learn about how they work in the protection and conservation of the islands.  The main attractions are the National Park information center, the Van Staelen Exhibition Hall, the Breeding and Rearing Center for young tortoises and adult Galapagos tortoises in captivity.

A delightful place reached by a nice zodiac ride. “Tintoreras” are small islands in front of Puerto Villamil coast. There is Heron lava on the lookout on mangrove branch, and Galapagos Penguin and sea lion often pop out on shore. White-tipped reef sharks are fairly common in the archipelago. Their name in Spanish is Tintorera.

Isabela Island is the largest and one of the youngest islands in the Galapagos archipelago. We land in Puerto Villamil, which has the second smallest population in Galapagos with approximately 3000 hab. We head up to the highlands from Puerto Villamil to Sierra Negra slope, and later we will do some hiking on uneven terrain until we arrive to the Sierra Negra volcano rim. Sierra Negra is the second widest crater in the world. From this viewpoint, you have fantastic sights to the 6 x 5 -mile-wide crater, the rest of the volcanoes, and Perry Isthmus, a 12 Km wide lava field. From here we can hike to Chico Volcano to watch the striking lava formations, examples of the geological occurrences that have created the Galapagos Islands.

Punta Moreno is located on the north coast of Isabela Island between the volcano Sierra Negra and Cerro Azul volcano. The trail runs along a lava flow Pahohoe (solidified lava in the form of corrugated or an accordion) into a complex of coastal lagoons. You can see several species of birds around this lakes and mangroves.

This is a marine visitor site, the excursion is carried out in a zodiac and so there is no landing point. Your zodiac ride starts with a visit to the Marielas islets where there is the largest and most important penguin colony in the Galapagos Islands. The excursion continues into the cove that is surrounded by red mangroves where you can admire their red roots and green leafs. It is here that you are able to observe sea turtles, flightless cormorants, spotted eagle rays, golden rays, brown pelicans and sea lions. Frequently visitors have been able to see Galapagos Hawks soaring overhead whilst schools of Pompano and Dorado fish swim below.

Fernandina is the third largest island in the archipelago and has a single visitor site: Punta Espinoza located at the northeastern tip of the island. In fact, you can see some of the uniques specied of Galapagos just across Tagus Cove. Marine iguanas conglomerate in larger groups than in any other island. They bask around in the sand, swimm near the shore and some time block the way at the landing dock. Among the unique species found here, is the Flightless Comorant. A bird that do to the lack of predators had to adjust their way of survival and perfectionate their skills of finding food in the ocean. Their wings, tails and feet progressively adapted for swimming. To see these birds, is to witness evolution happening right in front of you. Stay within 2m of the cormorants and penguins.

Tagus Cove, a tour along the cliffs in a zodiac will give the visitors a good chance to see the Galapagos penguin, the flightless cormorant and other sea birds. From the landing dock it is about a 30 minute hike along the trail up to the top of the clif from where you can view Darwin Lake, an uplifted ultrasaline lake saltier than the sea. You can also see several volcanoes from this location. Look carefully at the graffiti on the surrounding cliffs of the cove, the pirates, whalers as well as bucaneers wrote it in past centuries.

Espumilla beach is located in northern coast of Santiago Island in James Bay. During the last presence the El Niño phenomenon, one of the two lagoons in this site, underwent a process of sedimentation, thus causing the disappearance of a representative colony of flamingos. The main attractions are the palo santo forest and the marvelous. The beach is an important site for nesting marine turtles.

Its black beach is located at the west side of the island and is the main attraction of the island. Their volcanic tuff deposits have favored the formation of this special black sand beach.
This site is called Puerto Egas, because there was an attempt of company of Hector Egas, to start the exploitation of salt, which failed because the price of salt in the continent was very cheap, and did not justify its exploitation in Galapagos. The project was abandoned and they left their infrastructure.

Transfer to San Cristobal Airport for flight back home

No availability for this month